The Quarantine station about 1900.

A Quarantine station was built on the island in 1861, and first used in 1863. It closed in 1924. There were two main quarantine periods (the 1870s and WW1). A brochure and map of key points are available. Printed copies can be obtained from the keepers on the Island. 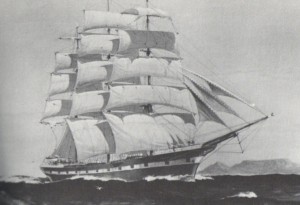 The first two buildings were built in clearings in the bush in 1861, but not used until 1863. The major buildings were completed in1873. A description of the facilities on the Island was published in June 1874.

There are ongoing efforts to save, and partially restore, part of this station, the ‘Married Quarters’ (1873).  The building represents an important part of Otago’s and New Zealand’s history and is one of only two 19th century, offshore Quarantine station dormitory buildings remaining in New Zealand.  It was the first ‘home’ in New Zealand for many settlers who arrived during the late 19th century on ships that were quarantined due to illness on board, and is also a tangible reminder of the 70 odd souls who died while there in quarantine, and are buried on the island. It and other remnants of the Quarantine station can be visited.

There were 41 ships in quarantine, in total about 9000 people, at least 72 people died in quarantine and are buried in the cemetery. The names of cause of death of 62 are known, but most graves are unmarked. The list of ships and causes of death is available in appendices in  QI A Short History, and here.

Every ship and immigrant has a story, most ships were grand clippers of the 1860s-1890s.  Notable people in quarantine included, Brogdenites (come to build Otago’s railways), Celestials (Chinese workers come to dig for gold), Polish refugees and soldiers. The last ship from this period was quarantined in 1902, the Dougall family maintained the station until 1924.

History: For an in-depth telling of the Island’s rich history, read ‘Quarantine Island/Kamau Taurua – A Short History’ by Lyndall Hancock (published by St Martin Island Community, 2008 and available from Dunedin Public Library, or the Community – $25 (plus postage). Email the Keeper or Secretary.

Account of the long and tragic voyage of the German ship ‘Palmerston’ in 1872 from Hamburg with people from Poland/Germany and Scandinavia/Denmark. These people were some of the first refugees coming to NZ, fleeing oppression under German occupation. http://andreassend.blogspot.co.nz/2009/12/voyage-of-palmerston-1872.html (also as a pdf)