“The Otago Harbour is a site of singular importance to the Kai Tahu, Kati
Mamoe, and Waitaha people of this district. It has been a source of
nourishment, a major highway, a sheltering location for human settlement, a
burial place and a symbol carrying the ancestral, spiritual and religious traditions
of all the generations prior to European settlement” (Tahu Potiki, Te Runanga o Otakou, submission regarding ‘Project next Generation’ on the harbour 2011).

Listen to Tahu Potiki recount  How Otago Harbour was formed .

“Regarding their legends, the Maori people of Otakou used to speak about taniwhas and fabulous monsters which performed extraordinary deeds. Hoani Karetai, the paramount chief of Otakou, used to speak about a taniwha which was the guardian of the spirit of a famous Kati Mamoe chief. This taniwha lost its master and set out in search of him. From Silverstream near the base of Whare Flat, it journeyed as far as the present Mosgiel. Then it took its course down the Taieri River and wriggling, caused all the sharp bends and twists in the river. The same taniwha scooped out the Otago Harbour. The monster now lies solidified in the Saddle Hill. The humps of the hill are named Pukemakamaka and Turimakamaka” (The Maoris of the South Island, TA Pybus, Reed, 1954).

The Island has had many names over the course of time.  Local Maori, the tangata whenua (people of the land) Ngai Tahu (Kai Tahu), knew Quarantine Island as ‘Kamau Taurua’.  This is an ancestral name, the name of an ancestral canoe and also ‘a place where nets are set.’

Because of the lack of water and a better alternative site to live at Otakou, it is unlikely that Maori stayed for extended periods on the Island. However, they will have set nets and collected shellfish around the bush clad island, as evidenced by midden.

The first two quarantine buildings were built in a clearing in the bush (painting below) in 1861. 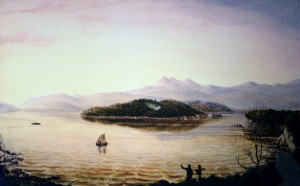