Most people who stay on the Island use the ‘St Martin Lodge’, a modified cottage with an interesting history! 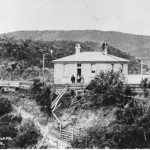 The original Keeper’s house. with the Dougalls outside (Port Chalmers Museum)

1872-1925. The first part of the house was first built in 1872 for the keeper of quarantine, John Dougall, and his family, who had lived on the Island since 1863.  This meant the Keeper’s family then had a house separate from the people in quarantine. Two of their children had died on the island so the separation was a definite improvement!

The house was a standard government four-roomed house with a lean-to kitchen, it was similar to the cottage by the Marine Studies Centre across the channel. It forms the middle of today’s Lodge- the two bunkrooms.

It was originally lined with painted timber, but in 1883 the ‘Sitting room’ was wallpapered, using newspapers as backing. The newspaper and original newspaper can be seen in one bunkroom, up above the door. 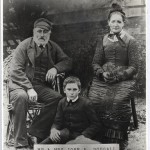 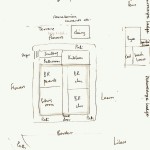 Plan of the Cottage when Bell Dougall was a girl

Three generations of the Dougall family lived in this house for 61 years. John was Keeper from 1861. Initially with his young family in an older building, then from 1872 in this house. When he died in 1890, his wife Elizabeth took over, then son Will became keeper. He lived here with his wife Hester and daughters Bell and Madge. The family were moved out for a time when the Island was used by the army as a military hospital during the first world war (1915-1919).

John Dougall and three of his children (died at ages 5, 7, 24) are buried in the Island cemetery.

Bob Miller smoking between dives. An assistant hold his round helmet.

He enlarged the Lodge in 1926 with materials bought from the New Zealand and South Seas Exhibition at Logan Park 1925-1926. Miller added leadlight windows, a new kitchen, lounge, and verandas reusing materials from the Exhibition. Notable recycled features are leadlight Joinery windows from an exhibition of ‘Modern Joinery’. 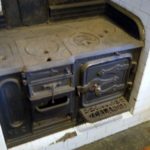 The kitchen was partially built and lined with materials from the old Quarantine station. A feature of the ‘new’ 1920s kitchen was the ‘Zealandia’ range. The range was proudly built in Dunedin by Barningham and Co at the foundry just off George St (the last part of the foundry building

was demolished to make way for the Dental school in 2016). In its heyday Zealandia ranges rivalled Shacklock’s Orion (from South Dunedin). Shacklocks later merged into Fisher and Paykel.

Bob Miller brought over the ferry Waikana and used her for excursions until the early 1930s. The Oreti was brought over for salvage/recycling and to shore up the causeway. Both ships are just hulks now.

He had grand ideas for the island , but in the Depression years of the 1930s, it was not maintained and deteriorated over the next few decades. 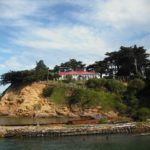 1958-today. The St Martin Island Community was formed and took over the island’s lease in 1958. The name was inspired by St Martin of Tours, a 4th century French saint, who sent out groups of monks and others to found new communities – not only evangelists but carpenters, stonemasons, cooks and bottle washers  -all needed to form a complete community; all using their skills for the common good. The Community adopted this idea , and the belief that ‘work and worship are indivisible’, from Iona Community in Scotland. The lodge was named ‘St Martin Lodge’ and dedicated in 2015 with a plaque made by Pav Pawlowicz.

According to Community member and historian, Lyndall Hancock, in 1958 the house was a dump. Initially, the island’s rich history was not researched or recorded;  it was considered forgettable. The first job with the house was to clean it up and get ready for camp groups, then steady tidying and altering as money permitted. Money was tight and energy was also needed for building the chapel and boat. Many jobs were just to patch up or prop up. However, in time the house was reroofed, a shower installed, rooms refurbished, and the outside repainted, etc.

More recently, bigger jobs were done on the house, usually spearheaded by certain people. Errol Thompson combined the kitchen and dining room, the Community could then sit together around a big table. Bruce Hellyer built new bunks in the bunkrooms and installed waterless 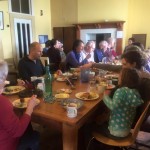 composting toilets to replace old toilet that flushed into the sea. Dave Collett repiled the front of the lounge and reset the windows. Graeme Furness built new benches and shelves in the kitchen using recycled timber. Graeme Furness also planned the extension of the kitchen roof and replacement of the old storerooms to make the ‘Mud room’ . Builder Matt King did this work with much help from volunteers. When Gordon Douglas was Keeper, he did much needed painting. Wool insulation was installed above the lounge and kitchen, and batts over other rooms. Today the lodge provides a basic and comfortable place to meet and stay.